Soumitra Chatterjee, the superstar of the Bengali film world, is no more with us

"Soumitra Chatterjee, the superstar of the Bengali film world, is no more with us". 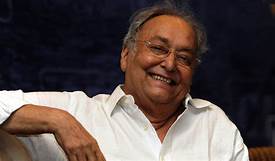 This is Soumitra Chatterjee. He was a famous Bengali actor. He has acted in many different roles in his acting life. He is called a superstar. He has a great reputation at home and abroad.

But the saddest thing today is that he left us all on Sunday, leaving only his memory. However, he had been suffering from the disease for a long time and died at the Bellevue Nursing Home in Kolkata on Sunday.

He was 86 years old at the time of his death. Then on Sunday evening his last work was done at Keoratala crematorium as per the rules.

His emaciated body was at the Rabindra Sadan in Kolkata that day before being taken to the Keoratala crematorium and then taken away from there. Soumitra Chatterjee was suffering from multiple diseases.

She contracted the corona virus and was admitted to Bellevue Nursing Home in Kolkata last September. He was also diagnosed with cancer at one point. In all of this, when his body became ill, the illness did not leave his body completely.

Repeatedly his body was getting sick. As a result, while being treated at the hospital, his body was sometimes improving and sometimes deteriorating. His body seemed to fall into a kind of dilemma.

Yet doctors have not given up, they have tried many ways to save, such as plasma therapy, bronchial surgery, and many more. But his condition deteriorated to the point that doctors were unable to save him.

Two days before his death, on Friday, his heart and kidney complications suddenly increased. At the same time, his heart rate also increased a lot. As a result, his body loses its function.

news soumitra-chatterjee actor superstar kolkata writing india
8 days ago by anima0167
W$0.97
2 votes
Reply 0
Authors get paid when people like you upvote their post.If you enjoyed what you read here, create your account today and start earning FREE WEKU!