2 years ago
toti198966 in cryptocurrency
OVERVIEW
VANTA is a decentralized and permissionless network that ensures real-time, secure and private connectivity. By using blockchain and crypto-economics designed for real-time networking, VANTA creates a system in which nodes participating in the network contribute to real-time data transmission and processing without relying on traditional centralized systems and networks. This system results in a low cost, functional blockchain-based network where anyone, regardless of existing platforms, can participate and use the network by using an API, an SDK, or modules to integrate with existing applications or platforms in use. In simpler terms, creative services will be provided and integrated within the VANTA ecosystem, and VANTA blockchain will greatly contribute to improving the daily lives of individuals and operations of enterprise businesses.

Allow individuals to create decentralized networks that perform real-time data transmissions as well as process and store that data by selecting intelligent peers, collaborating, and evaluating each other using the VANTA network protocol and the consensus algorithm.

PROBLEMS VANTA AIM TO SOLVE
Increasing network throughput and cost: Current networks and infrastructures that support various real-time networking are reaching throughput limits. This means that companies will not be able to provide reliable services since network and server costs will increase along with the increasing amount of data transmitted.

Real-time networking development costs and problems with centralized services: Many companies are limited (or even fail) to develop real-time networking services because of the cost, time, and skills required to develop and operate such services. As a result, an increasing number of companies are utilizing centralized API services that are prone to cost increase as usage increases, and to hacking or privacy issues because the data is stored on a centralized server.

Privacy concerns resulting from transferring and storing personal data: Currently, a lot of our personal data is being stored on centralized servers in order to provide smoother services/experiences, but at the cost of data being leaked and exposed to the public when the servers become compromised.

Access to data generated by devices and the data usage fees

PROPOSED SOLUTION
VANTA will solve the throughput and cost issues by making the common computers and mobile devices around the world, whose performance rapidly increases each year, contribute to real-time networking.

With Vanta Blockchain, it will be possible to transparently confirm the process of transmitting, storing and deleting data. Decentralized nodes, in addition, transmit and store real-time data, which prevent hacking and excessive/malicious use of personal data.

VANTA intends to create an efficient system that can quickly and safely send and receive data in real-time by creating a competitive system that instantly configures networks according to each situation.

TECHNOLOGY
I honestly think reading the Well written white paper is the best way to learn about the technology that will be used in Vanta Network. Its clear and goes into a lot of details but I will include some notable ones in here.

The ARKAS PROTOCOL
The ARKAS Protocol establishes a new decentralized network infrastructure that connects devices and people across time and space. ARKAS, the next generation real-time networking protocol, establishes real-time, encrypted, and private data and media channels including text, audio, video, and streaming. The protocol enables real-time data transmission, processing, and storage functions by selecting peers, collaborating, and evaluating each other.

PoN-VRBFT (Consensus Algorithm)
VANTA has created an algorithm called Proof of Networking that allows each node to contribute to real-time data transmission, processing, and storage in the network competitively. The workload of each node is verified by verifier nodes selected through VRF and recorded using VANTA’s unique workload unit called Net and Net price to prove the amount of workload and the actual value of it. This was combined with Byzantine Fault Tolerance (BFT) and Verifiable Random Functions (VRF) to design a unique consensus algorithm called PoN-VRBFT. The KANUS Chain selects few nodes based on the trusted random function referred to as Verifiable Random Function and participate in 1) block proposal 2) verification 3) confirmation.

STAKING
Tokens are staked in Vanta for :

API Usage (application developers): Companies that want to develop and operate services based on VANTA must stake VNTs in order to transfer, process, and store data using the VANTA API. There will be an expected amount of workload per month required for each service, and service providers should stake VNTs proportional to it.

API Usage (end-users): In cases when an application developer does not have sufficient funds to continue providing its services, a sudden influx of users, or when required by the business model of the service, developers can set staking rules for their end users. When a new user joins the service or uses the service heavily, the developer can allow the end user to stake the additional amount of tokens required for its workload

Joining as Nodes: Worker nodes that perform real-time networking jobs and participate in the consensus round are required to stake an amount of VNTs in proportion to its workload. Any device can participate in the VANTA network as contributors. They will be working on various real-time networking jobs, verifying each other, generating blocks, and receiving rewards. Participating nodes can be divided into job tracker nodes, worker nodes, or verifier nodes, depending on their roles in the network. 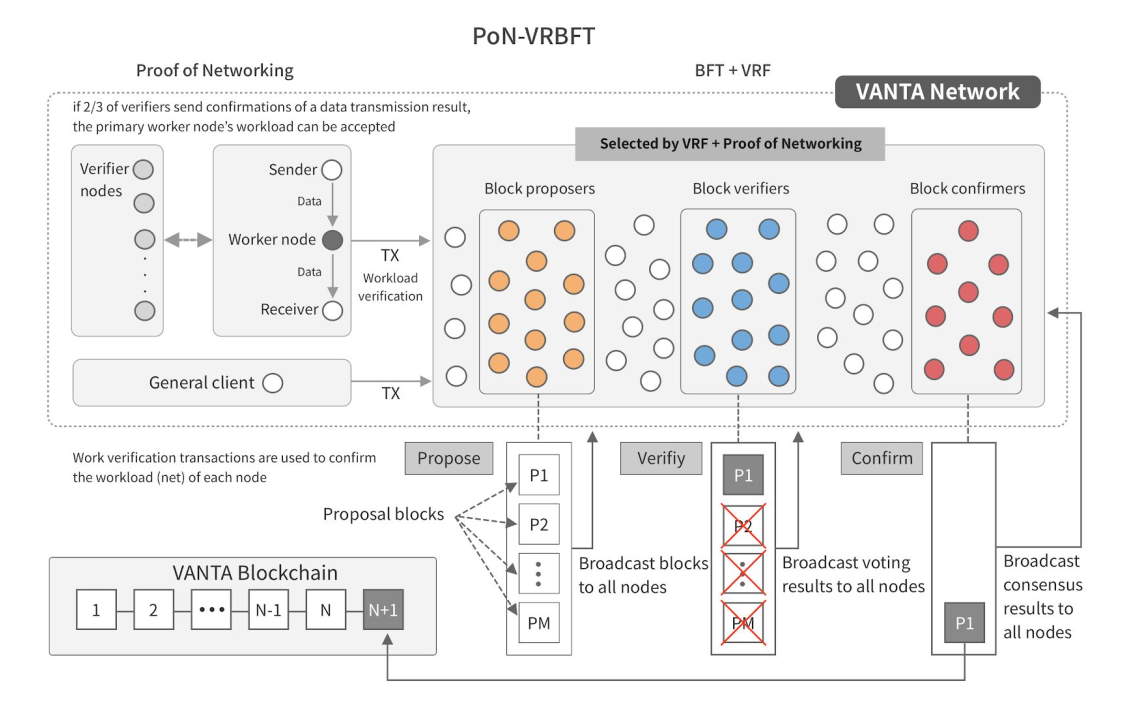 TEAM HIGHLIGHTS
The VANTA team comprises of engineers and executives from global
corporations such as Oracle, HP, AWS, Samsung, and Microsoft. The
VANTA Network is developed by PhDs and developers from top universities
in South Korea with educational backgrounds from UC Berkeley,
Carnegie Mellon, and Georgia Tech.

Joonhyuk Seo - CEO of Vanta. Has over 12 years of experience in IT & Telecommunication industry from ORACLE (JAPAC) and HP. He is also a founder and CEO of Voiceloco, the parent company of VANTA.

More details about Vanta core developers can be found here

Advisors seem to be really experienced and capable of developing the network. Something to note; none of the four advisors have Vanta Network in their LinkedIn profiles. Not necessarily a bad thing but worth pointing out.

PARTNERS
The VANTA team has established strategic partnerships with the following: 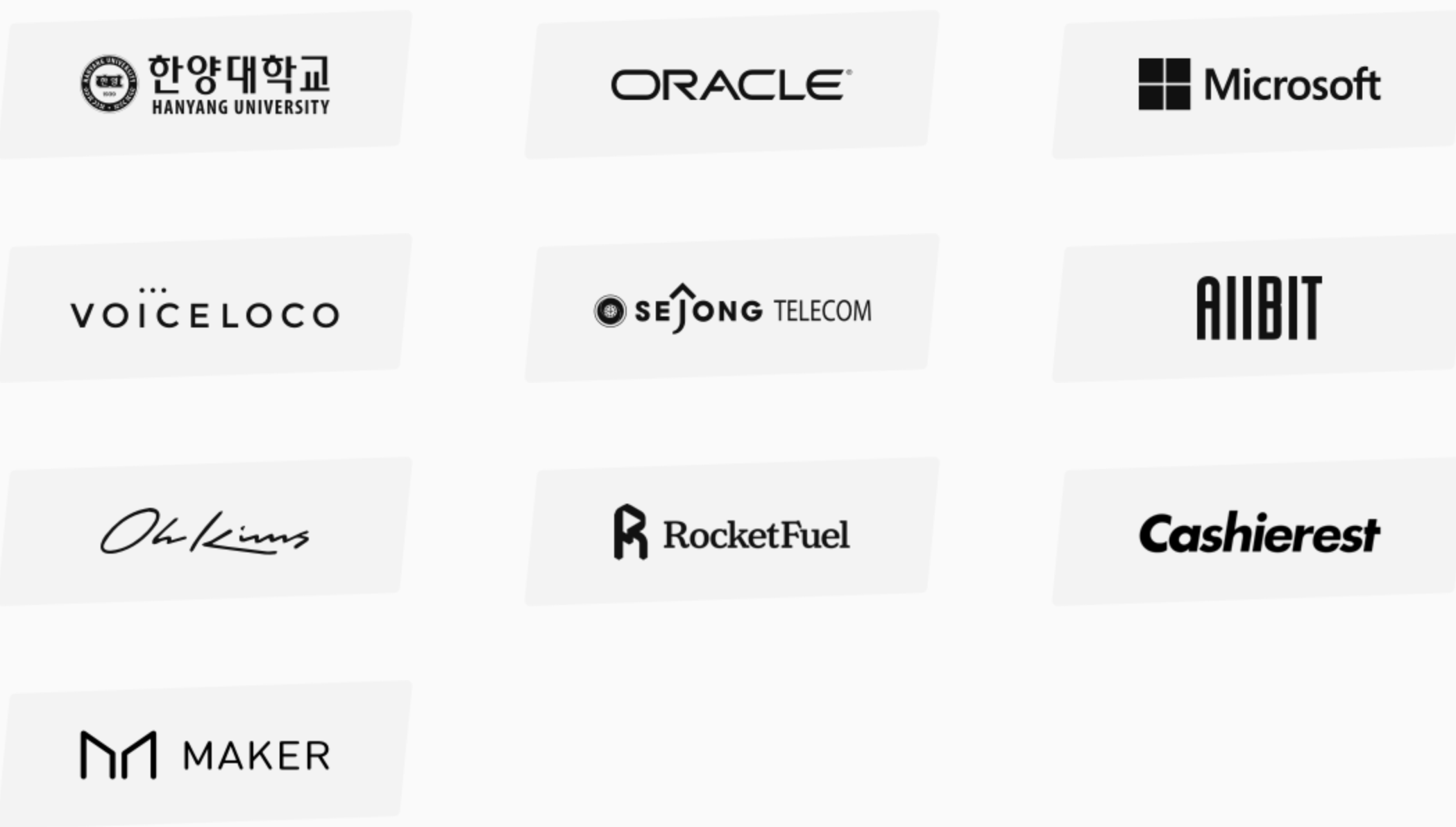 ORACLE - VANTA is working directly with Oracle ISV/OEM business unit as an ISV (Independent Software Vendor) to expand our reach to not only consumers but also to enterprise customers. VANTA will be promoting and selling innovative VANTA services to a variety of customers around the world by joining the Oracle Partner Network. VANTA Services – UcaaS (ciao, scheduled) and voice and video APIs will be available in Oracle Cloud Marketplace.

MakerDAO -VANTA Will be Accepting Dai Stablecoin for Qualified Investors in Presale, and is looking forward to exploring MakerDAO’s upcoming Multi-Collateral Dai to allow VANTA token to be held as collateral for Dai.

Voiceloco - The VANTA Network project is backed by Voiceloco, a Korea-based telecommunication startup that is specialized in software-based IMS and client m-VoIP engines(iOS/Android/web), in use by some of South Korea’s largest conglomerates, including Naver, the #1 search engine of South Korea, Lotte, and SK Networks.

Q2 2018 - Project Started -
Q4 2018- Whitepaper and Website launched
Q1 2019 - IEO launched, Technical paper to be released and development on ARKAS protocol begins
Q2 2019 - Test Net expected to launch
Q3 2019 - Main Net expected to be launched with ERC20 tokens swapped out for Native Tokens.
Q4 2019 - Once public APIs and SDKs are released, VANTA Incubation & Consulting, comprised of industry experts and advisors, will incubate dApps to be built on top of the VANTA Network for mass adoption
Above is the Vanta Network Roadmap which shows the goals they aim to achieve in other to fully develop and launch the network. Something to note is that token sale starts in January and will most likely end the same month or in February. Assuming exchange listing is quick and mainnet is expected in Q3 2019, that will leave roughly 6-8 months where the token will have no use or purpose other than sitting in a wallet.

MVP video demo showing how VANTA network provides a real-time communication backend infrastructure for mainstream applications can be seen below.

Vanta also currently has a non-blockchain MVP Voiceloco's Ciao which is like Skype or Google Hangouts. The Ciao application will be the first dApp available on the VANTA Network. Once the dApp is live, Users will migrate from the centralized version of the app to the decentralized version.

Github is currently private so I can’t look through their code to see how things are progressing. 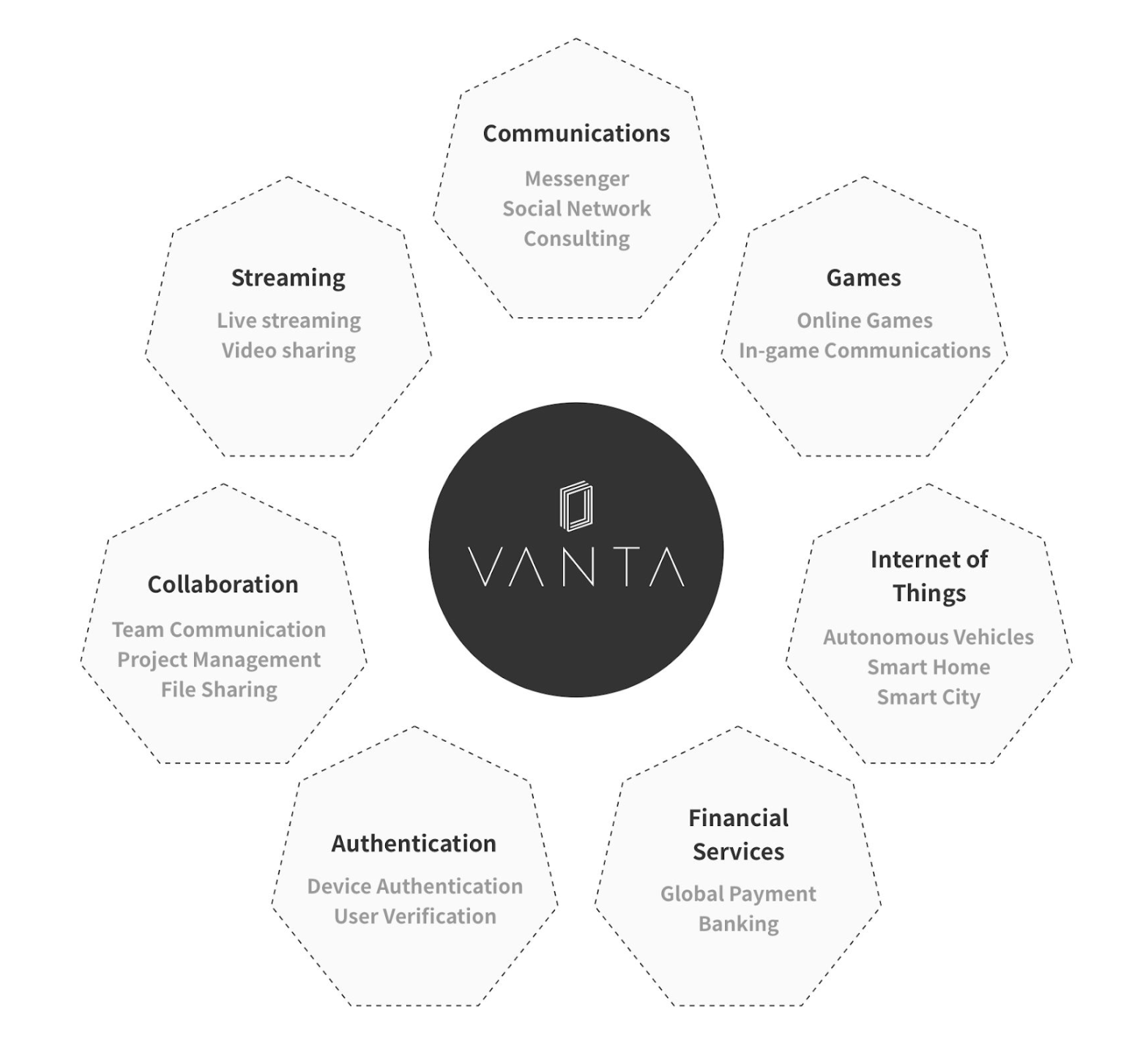 The VANTA ecosystem adopts both an inflationary and deflationary token mechanism to ensure appropriate incentives for users to participate in the network with an annual 2% of token inflation. Newly issued tokens are used to compensate the nodes performing block production and verification. The Network also incorporates a staking model to ensure free usage of the network. VNT token staking is required to use real-time networking APIs such as data transmission proportional to the amount of VNT tokens staked. Upon un-staking, 2% of the total VNT tokens previously staked are burned/incinerated. See illustration below for more clarity 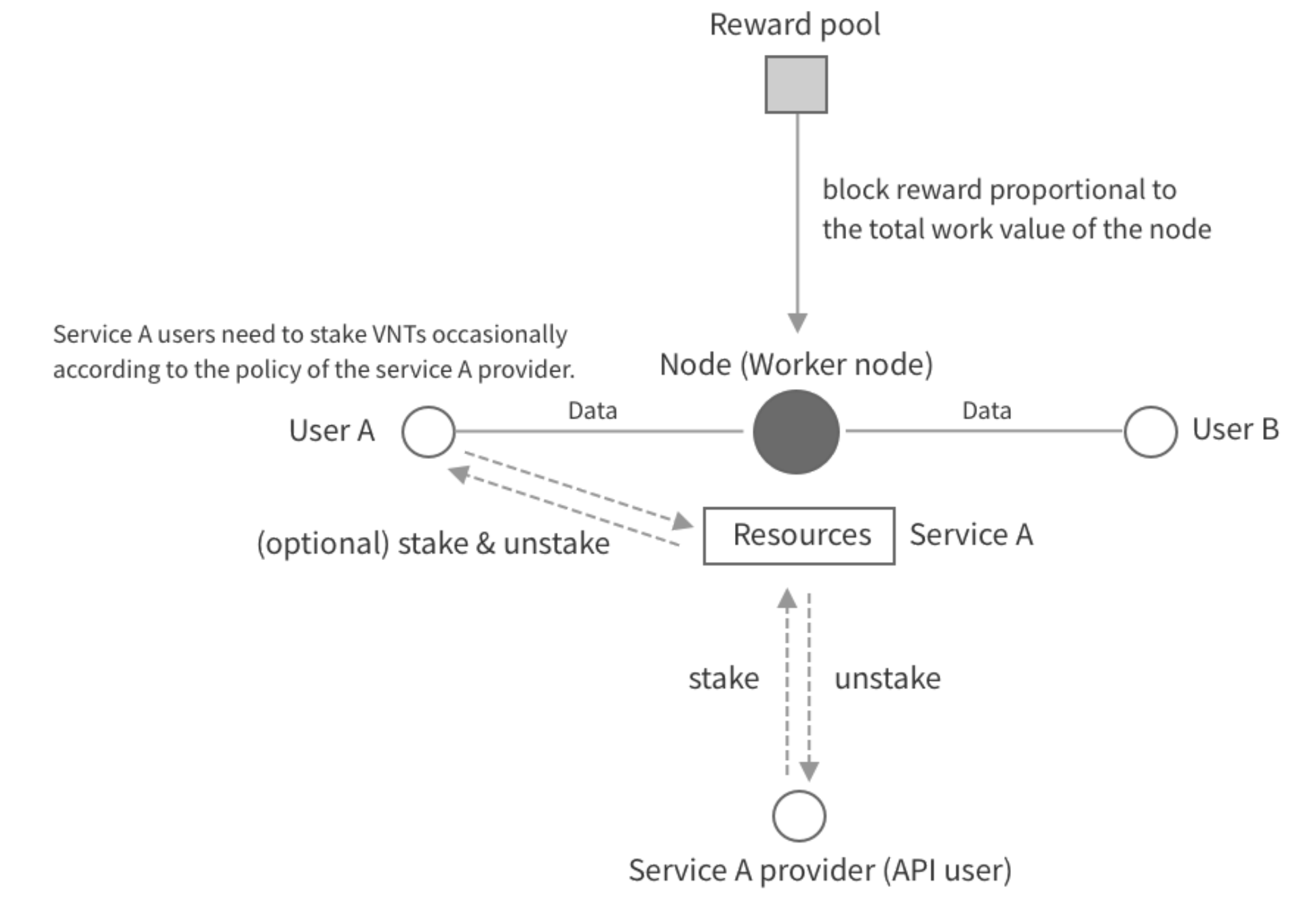 SOME CONCERNS
The hard cap is a little bit on the high side especially with just 35% of tokens being sold.
Github is private so I cant evaluate any code they've written so far
None of their advisors have Vanta on their profiles which is not really a big deal on its own
Token will have no use case after exchange listing until at least mainnet in 6-8 months
They will be in a competitive field with companies like Skrumble Network, Mainframe, and the upcoming Telegram Network
FINAL THOUGHTS
VANTA is a very interesting project that has some use cases I would personally try out when it launches such as their video/game streaming and the decentralized Skype-like dApp. During my research on them, they were very cooperative and answered my questions transparently

They already have partnered with two Korean exchanges AllBit (a subsidiary of UPbit) and Cashierest so listing should be quick after their token sale and adequate liquidity available for investors. Also, their First Token Sale Event on Cashierest Exchange successfully sold out early with a total of 1,299,983,670 VNT being sold at a value of approximately $1.2 mil USD. This was only available to Korean citizens and shows that VANTA has very good awareness in Korea.

I think their team and advisors are very capable and have the necessary experience to deliver on their promises (assuming they stay true to their investors and not get sidetracked with money raised like a lot of projects do).

They have good partnerships (Microsoft, Oracle) that should help them in getting awareness and gaining clients'

community-deals cryptocurrency
2 years ago by toti198966
W$0.00
Reply 0
Authors get paid when people like you upvote their post.If you enjoyed what you read here, create your account today and start earning FREE WEKU!